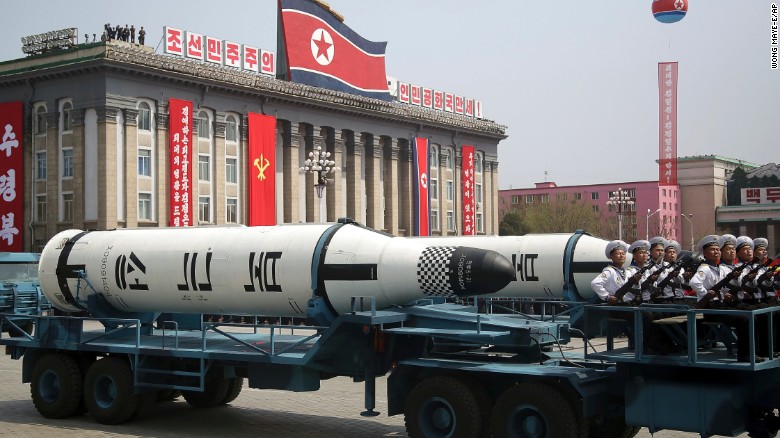 Only at a North Korean press conference at the United Nations, can you hear a diplomat say he hoped journalists had a good holiday weekend and then warn of possible thermonuclear war. North Korea has consistently issued threats of war toward the United States in recent decades, but the Trump administration's announced end of a "strategic patience" policy with Pyongyang has upped the ante in terms of warnings and bellicose rhetoric. North Korea's UN deputy representative, Kim In Ryong, on Monday unleashed at a hastily called UN press conference a torrent of threats, war scenarios and rhetoric aimed at the United States. The press event was held hours after US Vice President Mike Pence visited the demilitarized zone between North and South Korea. Pence warned North Korea not to test the resolve of the United States "or the strength of our military forces." In New York, North Korea returned verbal fire. North Korea's UN ambassador condemned the US naval buildup in the waters off the Korean Peninsula, plus the US missile attacks on Syria. On North Korean border, Pence tells CNN US will drop 'failed policy' On North Korean border, Pence tells CNN US will drop 'failed policy' Kim said, "It has created a dangerous situation in which thermonuclear war may break out at any moment on the peninsula and poses a serious threat to world peace and security." While reporters at the United Nations have heard similar rhetoric from North Koreans before, Monday's forceful wording was on a higher level. The deputy ambassador, reading from a statement, told reporters, "The US is disturbing the global peace and stability and insisting on the gangster-like logic that its invasion of a sovereign state is 'decisive, and just, and proportionate' and contributes to 'defending' the international order in its bid to apply it to the Korean Peninsula as well." Kim said his country is ready to react to any "mode of war" from the United States. Any missile or nuclear strike by the United States would be responded to "in kind," said the North Korea representative. The USS Carl Vinson carrier-led Navy strike group was sent to the Korean Peninsula. North Korea's UN representative said the maneuvers show the "US reckless moves for invading the DPRK (North Korea) have reached a serious phase." The United Nations is clearly worried. Spokesman Stephane Dujarric told journalists, "We're obviously deeply concerned about the rising tensions that we've seen in the Korean Peninsula. We call on all to redouble their diplomatic efforts. " The North Korean deputy ambassador was asked to respond to President Donald Trump's comment that North Korea should "behave better." He declined, instead wrapping up numerous questions about US policy and Pence's visit to the DMZ into a long series of criticisms of the United States. He denounced the United States for introducing into the Korean Peninsula -- what he called "the world's biggest hotspot" -- its "huge nuclear strategic assets, seriously threatening peace and security of the Peninsula and pushing the situation there to a brink of war." North Korea staged a failed missile launch over the weekend. Dujarric said, "I think the latest launch that we saw over the weekend from the DPRK was troubling. We call on the DPRK to take all the steps necessary to deescalate the situation and return to a dialogue on denuclearization." North Korea is upset that the UN Security Council will hold a meeting on the situation later this month, with US Secretary of State Rex Tillerson presiding. Pyongyang again said it has sent letters demanding its own hearing at the Security Council for alleged US abuses, but they have been ignored by a council which has seen numerous council resolutions violated by North Korean missile and nuclear tests. To add to the list of warnings, the North Korean diplomat said his country would hold the United States accountable "for the catastrophic consequences to be entailed by its outrageous actions." Journalists were asked to give their names on a sheet passed around by the North Koreans, but the sign-up sheet was left behind apparently when the news conference concluded.