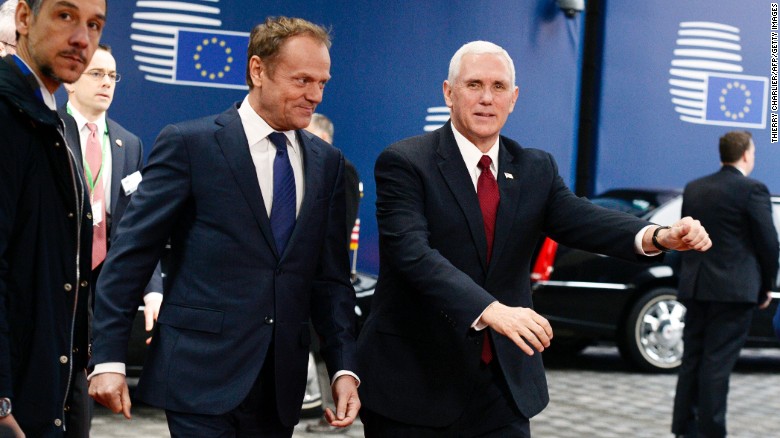 Who Speaks for Trump

White House strategist Steve Bannon described the European Union as a flawed institution to Germany's US envoy a week before Vice President Mike Pence reaffirmed the US commitment to the EU in Brussels, two diplomatic sources with knowledge of the conversation told CNN. Diplomats said that Pence's message of reassurance fell flat on European officials who are concerned about contradictory messages from Washington regarding the future relationship between the US and the EU. And it adds to the list of subjects about which President Donald Trump and administration officials are confusing allies. 'Combative conversation' Bannon told Peter Witting, the German ambassador to the US, that the Trump administration wants to strengthen bilateral ties with individual European countries rather than deal with the entire bloc, the sources said. In what was described as a "combative" conversation, the sources said Bannon spelled out a nationalist world view and cited a wave of anti-EU populism as evidence of the bloc's flaws, a similar refrain to the one he had previously articulated as the chief of the right-wing website Breitbart News. US Vice President Mike Pence (R) walks with European Council head Donald Tusk (L) prior to their meeting at the European Commission in Brussels on February 20, 2017. "It is my privilege on behalf of President Trump to express the strong commitment of the United States to continued cooperation and partnership with the European Union," he said at a meeting with European Council President Donald Tusk. "The United States' commitment to the European Union is steadfast and enduring." A senior Trump administration official denied that Bannon disparaged the European Union during what they said was a "quick meeting" with the German ambassador. Separately, a White House spokesperson said the conversation being described as confrontational was "not an accurate account" and that the conversation "was just a quick hello." The vice president's office did not respond to a request for comment. "There is no one in the administration who really understands the EU's important role and certainly nobody who will defend it," one diplomat told CNN, adding, "Pence and others are saying basic reassuring things that we aren't sure square with not only the policy, but also what where the President sits." The official continued, "We don't want to jump to conclusions. We don't know whether Bannon will be able to carry through with his vision and we don't know what Trump thinks." The conversation between Bannon and Wittig was first reported by Reuters. Lack of US backing Some foreign figures have even noted the lack of US backing for the EU in public statements. French Foreign Minister Jean-Marc Ayrault pointed out the omission on Twitter following Pence's speech to the Munich Security Conference ahead of his Brussels stop. "In Munich, Vice President Pence renewed the U.S. commitment to the Atlantic alliance. But not a word about the EU," he wrote. Speaking after meeting with Pence Monday, however, Tusk stressed Pence's expression of backing for the EU during their private session. "We are counting, as always in the past, on the United States' wholehearted and unequivocal -- let me repeat, unequivocal --support for the idea of a united Europe," Tusk said. The world would be a decidedly worse place if Europe were not united," Tusk said. "In this respect we will not invent anything better than the European Union." 'Neither pro-EU nor anti-EU' A senior White House official involved in foreign policy told CNN that the Trump administration's European policy is neither "pro-EU" nor "anti-EU." The official explained that the administration would focus on cooperation with the bloc without advocating for it overtly, adding that if a country decides to hold a referendum on exiting the union, the White House will remain neutral. That's a shift from the administration of President Barack Obama, which vocally advocated against Britain's decision to leave the EU this summer, a campaign that included a presidential visit to London in April 2016. Decisions on whether to remain a member, the official said, should be left to the countries themselves, without US interference. The official added that while the US will seek to cooperate with the EU in already-existing areas of collaboration, it is not seeking to bolster the union by preventing further disintegration. Trump himself praised the Brexit vote during the presidential campaign, calling himself "Mr. Brexit" following the result of the referendum. And days before his inauguration Trump called the EU "basically a vehicle for Germany" in an interview with German and British newspapers, adding, "That's why I thought the UK was so smart in getting out." In Brussels, Pence was extremely cautious in his language on the EU. While he vowed "cooperation" with the bloc, he never explicitly said the US "supports" the EU. Both Wittig and the German government declined to comment for this story, citing the private nature of the conversation. But one of the diplomatic sources CNN spoke to said that Wittig gave a passionate argument about the importance of the EU and felt his views were heard by Bannon. The senior Trump official, however, said that the only topic that came up was that the US would continue to stress the importance of NATO members -- including Germany -- devoting 2% of their GDP to defense spending. Pence repeatedly stressed the defense spending issue during his European tour -- as did Defense Secretary James Mattis, who also attended the Munich conference -- something German officials called a "fair demand." But both men also repeatedly stressed America's support of NATO.