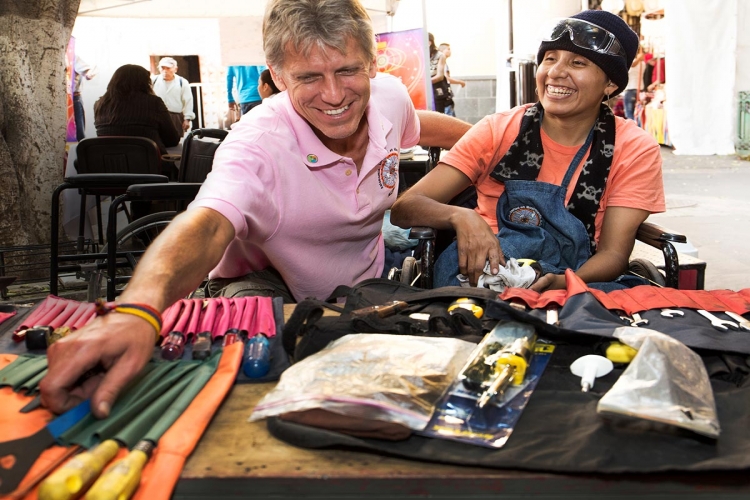 From the September 2014 issue of The Rotarian

Levi Johnson Jr. makes a mean barbecue sauce. Born in western Tennessee and raised in Detroit, he developed a taste for Southern cooking during childhood vacations in his mother’s hometown. She was the first in her family to pack up and head north in search of work, so he was the odd one out on those trips as the only city boy. But he felt at home in the kitchen, where he would watch his grandfather cook and savor the distinctive twang of his signature sauce.

Johnson has lived in Detroit ever since. He raised a family of his own here and worked for years as a mechanic servicing school buses for the Board of Education. He’s kept busy the rest of the time by playing music with local bands, helping out at church, and cooking up batches of Mr. Levi’s My-T-Fine Soul Sauce for family and friends.

In 2010, amid the economic crisis, a quarter of the city’s public schools closed, and Johnson was laid off from his job with the school board. He eventually found another opportunity to do the same work for a private company, but he’s not making what he used to, and the benefits aren’t as good. “Nineteen years on the job and I was faced with being out of work,” he says. “I’m not old enough to retire. So I said, ‘Well, I’m going to have to dig deep within myself and see what I can do.’ That’s how I wound up getting serious about this sauce business.”

Johnson is one of 13 entrepreneurs working with Launch Detroit, a project of Rotary District 6400 (parts of Michigan and Ontario) that provides microloans and free business education to small-business owners and pairs them with Rotarian mentors. He heard about the program through a community kitchen for food entrepreneurs at Eastern Market, one of the largest historic shopping districts in the country. “I was talking with someone there about what steps I would have to take to start manufacturing larger quantities of my sauce,” Johnson recalls. “Then I got an email the day before the first Launch Detroit information session.” He’d looked into other small-business development programs, but many had steep entry fees or required attendance at classes during his workday. “When I heard what Rotarians were talking about doing, it sounded like it was tailored to where I was trying to go. It was that spark that I needed.”

The Launch Detroit planning committee accepted Johnson’s application and granted him a $1,000 loan in January. He used it to sign on with a local packaging business that manufactures and distributes small batches of craft condiments in the Great Lakes region. The company is working with Johnson to adjust the recipe for wider distribution, redesign the labels, and test the sauce for USDA approval, aiming to get his product on shelves in 60 stores. In the meantime, Johnson’s Rotarian mentor is helping him bring his Soul Sauce into high-end suburban delis.

“I’ve still got a lot to learn, but I’m closer to my goal than I’ve ever been,” Johnson says. “When you have somebody who’s willing to get behind you, somebody who believes in what you’re doing, there’s no reason not to succeed.”

ROTARY CLUBS have played a large role in promoting microfinance programs in the United States. Based on the premise that small-scale private loans paired with education and support services can have an outsize impact on troubled communities, the concept has flourished in developing countries and gained popularity stateside in the wake of the Great Recession. And it’s a natural fit for Rotarians, who represent a cross-section of business and community leaders with a wealth of experience and connections.

In 2012, Marilyn Fitzgerald, a member of the Rotary Club of Traverse City, brought the idea for a microloan project in Detroit to leaders of District 6400, which encompasses Detroit; Windsor, Ont.; and the suburbs along both sides of the Detroit River. She’d implemented similar projects in the developing world and had adapted that model to help rural farmers in northern Michigan.

“If we can do microloan projects abroad, why can’t we do them in Detroit?” Fitzgerald asks. “People are starting to recognize that the economy isn’t ever going to be what it was, but it can become something different – even something better.”

Larry Wright, chair of the Launch Detroit planning committee, knows that it doesn’t take a lot of money to get a business up and running. In the late 1970s, he and his wife, Sarah, started a landscaping company out of their home with a $2,500 bank loan, which helped them buy equipment. Like many small-business owners, the Wrights encountered some setbacks, but they repaid the loan and have since developed a successful operation, thriving despite the region’s lagging economy.

We carry out service projects that enhance economic and community development and create opportunities for decent and productive work for young and old.

Nearly 800 million people live on less than $1.90 a day. Rotary members are passionate about providing sustainable solutions to poverty.

We provide training and access to well-paying jobs and financial management institutions.

We create opportunities to help individuals and communities thrive financially and socially.