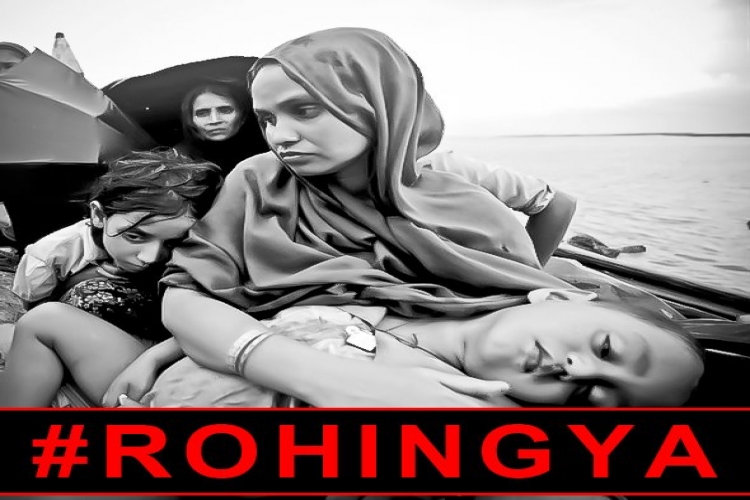 If you're not ready to donate now!

It will be used rehabilitation of Victim Muslims Rohingya.

Hundreds of Rohingya Muslims are fleeing a military crackdown in western Myanmar to Bangladesh, trying to escape an upsurge of violence that has brought the total number of dead confirmed by the army to nearly 90.

Some of the Rohingya were gunned down as they tried to cross the Naaf river that separates Myanmar and Bangladesh, while others arriving by boat were pushed away by Bangladeshi border guards and may be stranded at sea, residents said.

The bloodshed is the most serious since hundreds were killed in communal clashes in the western Myanmar state of Rakhine in 2012. It has exposed the lack of oversight of the military by the seven-month-old administration of Nobel Peace Prize winner Aung San Suu Kyi.

Soldiers have poured into the area along Myanmar's frontier with Bangladesh, responding to coordinated attacks on three border posts on Oct. 9 that killed nine police officers.

They have locked down the district, where the vast majority of residents are Rohingya, shutting out aid workers and independent observers. The army has intensified its operation in the last seven days and has used choppers to reinforce, with dozens reported killed.

Aid workers, camp residents and authorities in Bangladesh estimated at least 500 Rohingya had fled Myanmar since the October attacks. The refugees are now staying in four Rohingya camps on the Bangladeshi side of the border, they say.

But on Tuesday, Bangladeshi border guards pushed back a large group of Rohingya trying to cross.

"Early Tuesday, 86 Rohingya including 40 women and 25 children were pushed back by the BGB (Border Guard Bangladesh) from the Teknaf border point," said Lt. Col. Anwarul Azim, commanding officer of the Cox's Bazar sector in eastern Bangladesh.

"All of them tried to enter Bangladesh and came by two engine-operated boats. Now we have beefed up our patrolling and additional forces have been engaged to ensure security in the border area," he said.

Reuters sources said the Rohingya group was unlikely to have gone back to the villages in Myanmar and might be stranded at sea.

The stateless Rohingya are seen by many Myanmar Buddhists as illegal immigrants from Bangladesh.

Col. Htain Lin, Border Affairs Minister of the Rakhine state government, refused to comment on the situation. Police Major Kyaw Mya Win, from the Maungdaw police, said the people were trying to escape because they tried to attack the military.

"The villagers have become insurgents, including women in the village," said Kyaw Mya Win.

A series of recent skirmishes and attacks had increased to 69 the tally of suspected Rohingya Muslim attackers killed since Oct. 9, while the security forces' toll stands at 17, according to state-owned media.

Four Rohingya from northern Rakhine contacted by Reuters by telephone on Wednesday confirmed that hundreds were trying to escape and cross the river to Bangladesh. They said some were gunned down.

"The residents told me nearly 72 people were killed near the riverbank, that the military shot into the crowd on the river bank," said a Rohingya community leader who declined to be identified.

Another man from Maungdaw said women and children from around 10 villages were trying to flee to Bangladesh and some were killed as they were trying to get into the boats.

"A lot of dead bodies were floating in the sea," said the man. He added that these people were not traveling together, but that they had separated into groups of 20 or 50 to get on to the boats.

Residents and rights advocates have accused security forces of summary executions, rape and setting fire to homes in the recent violence. The government and army reject the accusations.

Diplomats have also appealed for an independent and credible investigation, but the government has not announced any plans to carry it out, instead cautioning against a "misinformation campaign" by a "violent group based in Rakhine".

"They are using our country, our region as a base...with the intention of disrupting the area, causing unrest, chaos in the area, they are doing this to get international attention, to pressure Myanmar," said Aye Aye Soe, director general of Myanmar's Ministry of Foreign Affairs, run by Suu Kyi.

She said the group was doing this to get financial support with the intention of "getting their political agenda through". The "extremist group" did not want peace in Rakhine, she said.

The suspected Rohingya militants have identified themselves as the previously unknown Al-Yakin Mujahidin in videos posted online. In a fresh clip, a man who has appeared in previous videos stands in front of several men prostrated on the ground with wounds on their back and bloodied legs.

"We are Rohingya and we want to restore our usurped rights," the man shouts to the camera. "We deserve our rights and we are not terrorists."